HYDERABAD: It was a windfall again for the second day for the Hyderabad Metropolitan Development Authority (HMDA) in the open plots auction conducted by it on Monday. The authority earned about Rs 475 crore for 31 plots on day two of the auction. The metropolitan authority had put a total of 67 plots located in Uppal Bhagat layout near Nagole for auction over a period of two days. All the plots were sold with great demand being displayed by builders and developers, especially for the bigger plots that were put for the auction on the second day. 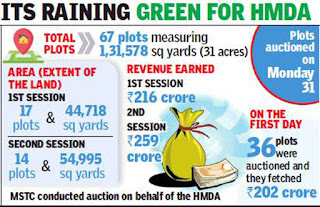 “The reason for the slightly less bid amount per square yard, compared to Sunday’s bids, was as the HMDA put above 2,000 sq yards size plots for sale. Only big developers and builders, who want to develop malls, commercial complexes, IT towers come forward to grab it. But the authority gets benefit as for bigger plots require less space for roads, open spaces and other amenities compared to smaller plots,” a senior official of the HMDA connected to the auction said.

Officials said the auction was conducted in two sessions on Monday. Seventeen plots were put for auction in the morning session (from 9 am to 12 noon) covering a total extent of 44,718 square yards, while the afternoon session was held for 14 plots between 2 pm and 5 pm covering an extent of 54,995 square yards. There was enthusiasm from the bidders as the auction continued till late evening. In the first session, the revenue earned was Rs 216 crore while it was about Rs 259 crore in the afternoon session.
Officials said the successful bidders will have to pay 25 per cent of the bid amount within one week from the date of issuing allottment letter.

The balance amount can be paid within two months. For those seek more time, they will need to pay the amount with interest.

The names of the bidders is being worked out by the MSTC Limited, which conducted auction on behalf of the HMDA.
Posted by MSTC Chairman cmdmstcindia at 17:37