Annual General Meeting of MSTC Limited held at Kolkata on 21.09.2017 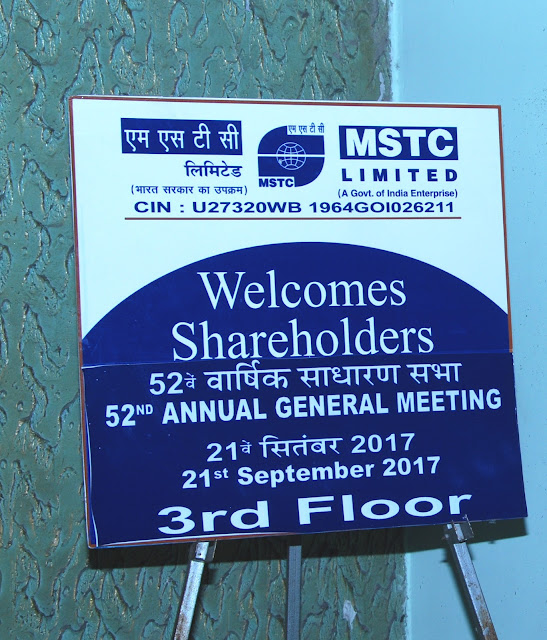 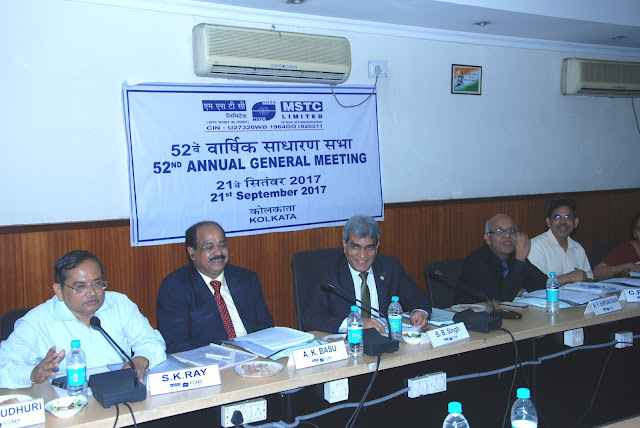 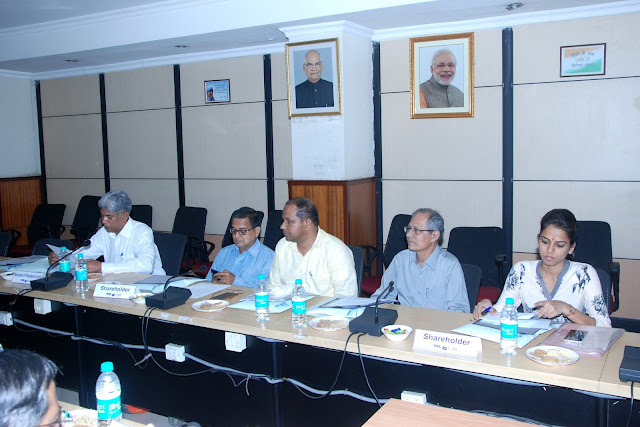 The Annual General Meeting of MSTC Ltd. for the year 2016-17 was held at its registered office situated at 225-C, AJC Bose Road, Kolkata-700 020.  Shri B.B. Singh, Chairman & Managing Director, Shri A.K. Basu, Director(Finance), representative of Ministry of Steel, Shri S. Narayanaswamy, Under Secretary to the Govt. of India and senior representatives of Shareholders were present in the meeting.  CMD addressed the gathering.

Address of Chairman & Managing Director are as follows :-

Dear Shareholders,
I heartily welcome you all to this 52ndAnnual General Meeting of the Company.  I am before you in this meeting for the 8thtime and this is my second meeting as CMD of the company, a role and responsibility bestowed upon me by the Government who is the major shareholder. I assure all of you and the other stakeholders who are not present here, that no effort, big or small, shall be missed, which aims to make MSTC a bigger, stronger and an efficient organisation, keeping best governing practices in place.
The Board’s Report, Auditors’ Report and Financial Statements have been received by you and I take them as read. We have ended the year with a Profit after Tax (PAT) of Rs. 6,543Lakh compared to Rs. 6,010Lakh for the previous year. In term of volume of business, we are up by 67 %.Your company is the fastest growing company in e-commerce sector. On the basis of its performance and reputation, Central Government, PSUs and State Governments and even private companies have given various kinds of jobs to MSTC.

During FY 2016-17, MSTC has successfully conducted e-bidding for allocation of major mineral blocks containing limestone, iron ore, gold and diamond in different states like Chhattisgarh, Jharkhand, Odisha, Karnataka, and Rajasthan. Besides, MSTC has an e-bidding portal for allocation of minor mineral blocks in Chhattisgarh. The contract for collection of Royalty on minerals being transported in Rajasthan has also been awarded through MSTC’s e-bidding system during 2016-17. MSTC has implemented the e-auction of coal linkage auction for non-regulated sector for Coal India Limited during the last fiscal. There is a prospect of huge business coming in from various states for minerals, particularly sand mining blocks which were being allocated in physical manner. MSTC has opened offices in these states to make this business happen in a seamless manner. MSTC has also conducted e-auction of confiscated Red Sanders for a value of Rs. 352 Crore on behalf of Govt. of Andhra Pradesh. Diversifying its e-business in steel sector, MSTC launched MSTC METAL MANDI “M3”, which is a virtual marketplace for B2B & B2C transactions for sale and purchase of iron, steel and Non Ferrous products especially.
During 2016-17, MSTC has delivered certain key e-bidding packages for various ministries of Government of India. The DEEP portal became fully operational for short term PPA and PPAs worth more than one lakh MW was settled through this portal. MSTC completed the transactions under DDUGJY scheme for bulk procurement of transformers, conductors and cables for various DISCOMs all over the country.  During the last fiscal, MSTC introduced the e-bidding platform for tariff based competitive bidding for selection of inter-state transmission service provider. MSTC also successfully developed and executed the bidding for discovered small oil & gas fields for Ministry of Petroleum & Natural Gas.
Coming to the shareholders’ issue,MSTC capitalized reserves by issue of fully paid bonus shares for the first time in 1993 at the rate of 1:1 and again in 2012-13at the rate of 3:1. The paid up capital which was initially Rs. 1.1 Crore rose toRs. 8.8 Crore.In 2015-16further issue of bonus share @ 1:1 enhanced the paid up capital to Rs. 17.6 Crore.Issue of bonus sharesat the rate of1:1 for 2016-17 was further, approved in the last AGM, and onapproval of the Government, the shares have already been allotted to shareholders.I am happy to announce that the share capital of the company as on datestands at Rs. 35.2 Crore.We have paid interim dividend at the rate of 95% on paid up capital of Rs. 17.6 Crore  during 2016-17 and have proposed a final dividend at the rate of 71% on enhanced paid up capital of Rs.35.2 Crore. The trend shows that year after year the shareholders’ value have been enhanced leading to substantial growth in Government’s investment as well as private investors who hold 10.15% of shares.

I would like to inform that few internal restructuring of the organisation and HR Policies are being made, all with an intention to deliver better service to our clients and thereby to remain strong in business on sustained basis. Recruitment at entry and lateral levels are being made to replace the superannuating employees and also to cope up with the new business. Your Company has not lost a single manday during the last year and industrial relations have been  extremelycordial.

MSTC has formed a Joint Venture Company “Mahindra MSTC Recycling Pvt. Ltd.” with Mahindra Intertrade Ltd which hasacquired a land in Greater Noida for setting up of the first ever collection dismantling centre in India.

North East Region is rich in agri and forest produce. Looking at the vast potential of North Eastern Region, MSTC has embarked upon developing eco system bringing all the enabling partners such as an aggregator, Central Rail side Ware housing Corporation (CRWC), for logistic support. This eco system will not only improve the financial status of the growers but also prevent the crops from colossal wastage and make available niche products to the main land of the country. This collaborative effort may play an important role as envisaged in the Government policy for the development of the North East Region.
MSTC Ltd has launched anationwide electronic portal – eRAKAMfor trading in the horticulture products.The online trading platform which primarily deals in food grains, vegetables, fruits, spices and all agriculture related commodities and connected farmers directly with consumers, has launchedforward trading in pineapple, ginger among a number of other such commodities to make the platform successful. Soon after the launch of e-RAKAM portal, MSTC conducted e-auctions for sale of moong dal on behalf of NAFED and discussion is in advance stage with MMTC and other organisations for sale of other agri produces.

MSTC has setup a new department to promote e-retail software services keeping in mind huge business opportunities in this sector. MSTC has developed an unique software for oil marketing companies (OMCs) for online computerized draw system for selection of LPG distributors in all the districts of our country.

You are aware that MSTC is a socially aware company and have taken up various social upliftment projects throughout the country. Your company follows the best and fair trade practices. Ethical and social values do find a place in taking corporate decisions. This is apart from complying with CG Guidelines under the Regulations and DPE Guidelines.To give better and seamless services to shareholders, the shares have been dematerialised under NSDL and shortly will be dematerialised with CDSL also. Efforts are being made to make bank transfer of dividend. I request all the shareholders to furnish bank details for electronic transfer.

Lastly I acknowledge humbly the trust and faith reposed on me and my team by Government, who holds majority stake and is administrative controller of the Company, the non-Government shareholders, principals, the bankers, various State Governments and lastly the employees of the Company.

Wishing you the best wishes for Durga Puja, Deepavali and festivals coming ahead. 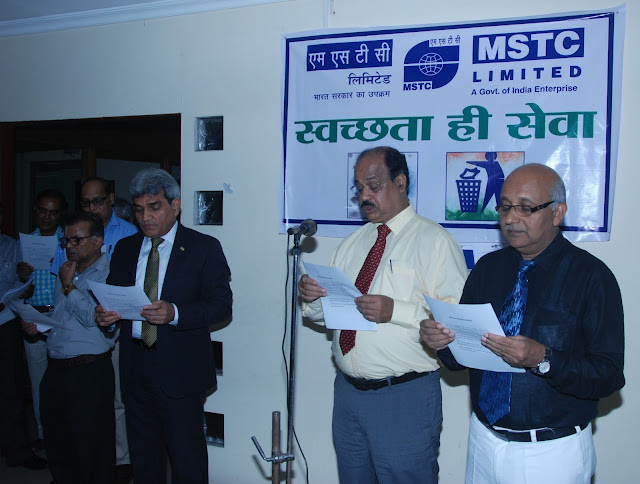 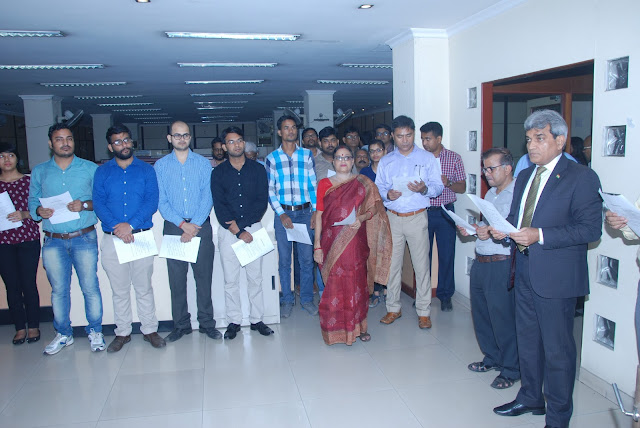 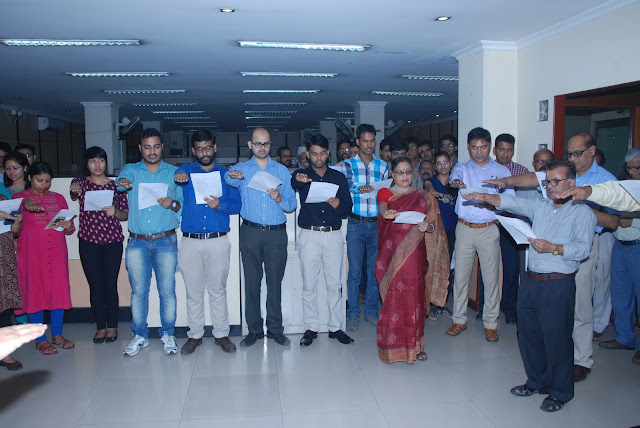 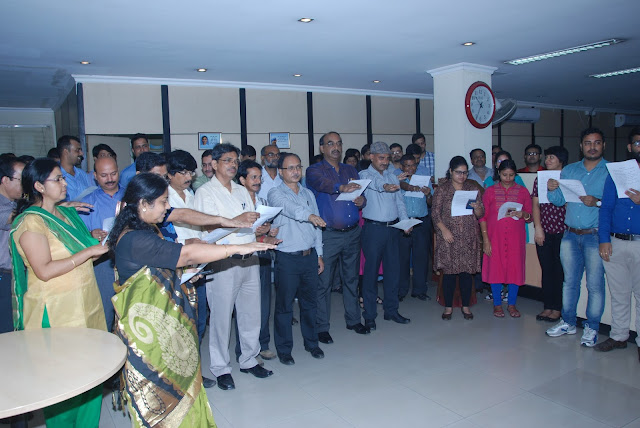 Posted by MSTC Chairman cmdmstcindia at 15:43 No comments: 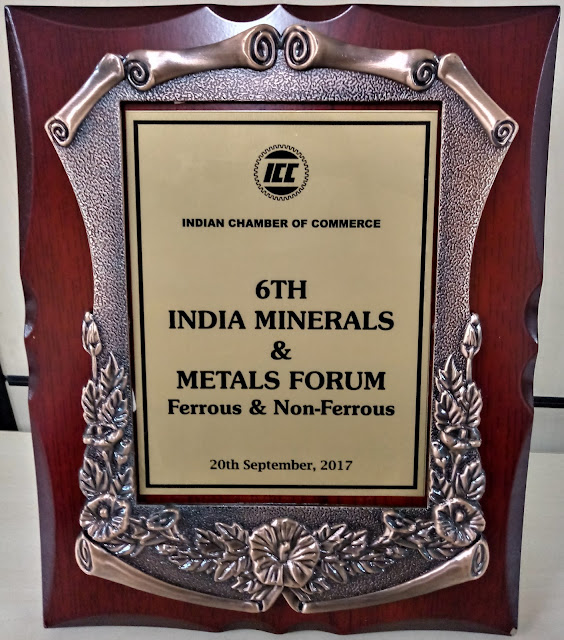 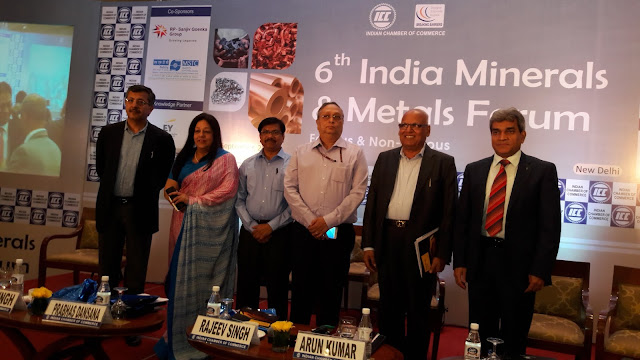 Shri B B Singh, CMD, MSTC Limited participated in the program on 20.09.2017
Posted by MSTC Chairman cmdmstcindia at 13:42 No comments: 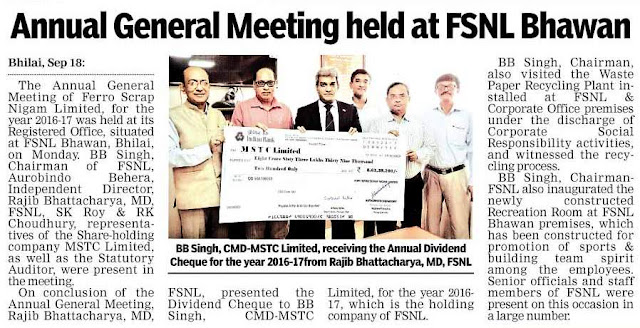 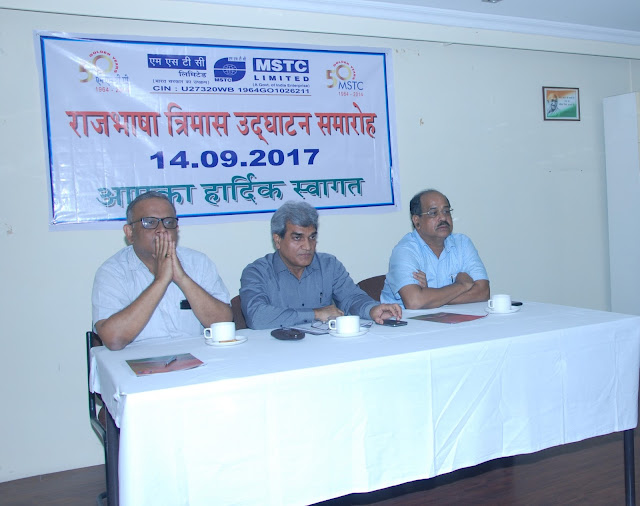 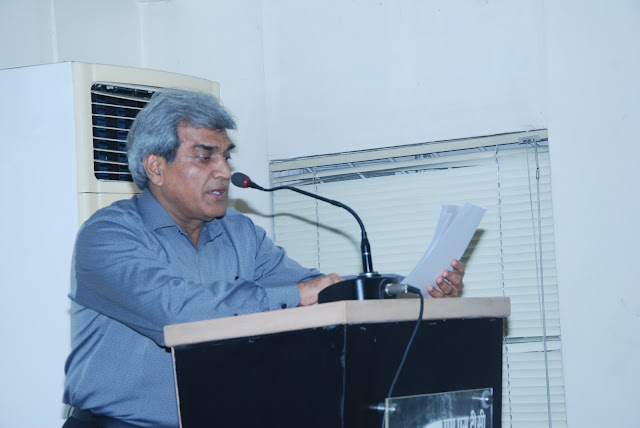 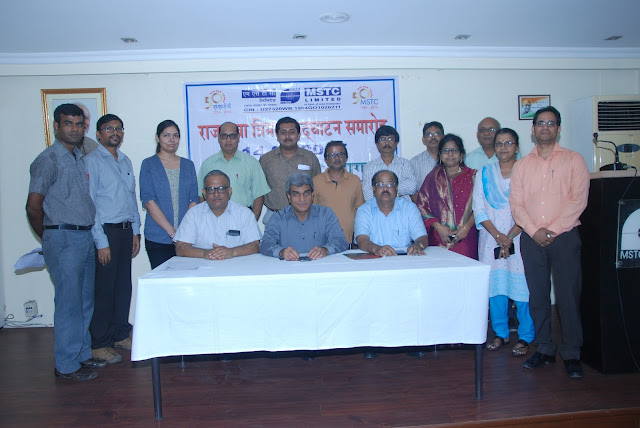 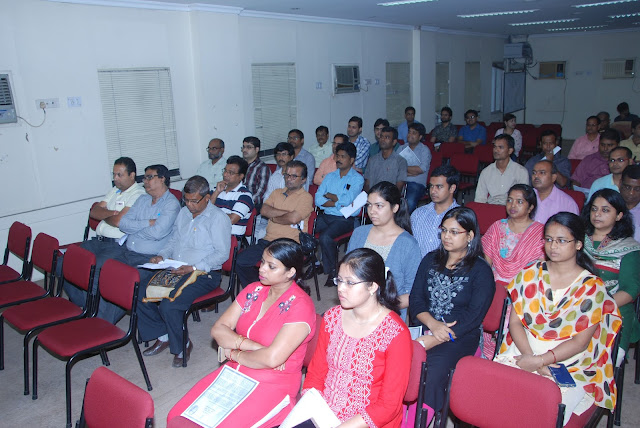 Posted by MSTC Chairman cmdmstcindia at 16:53 No comments: 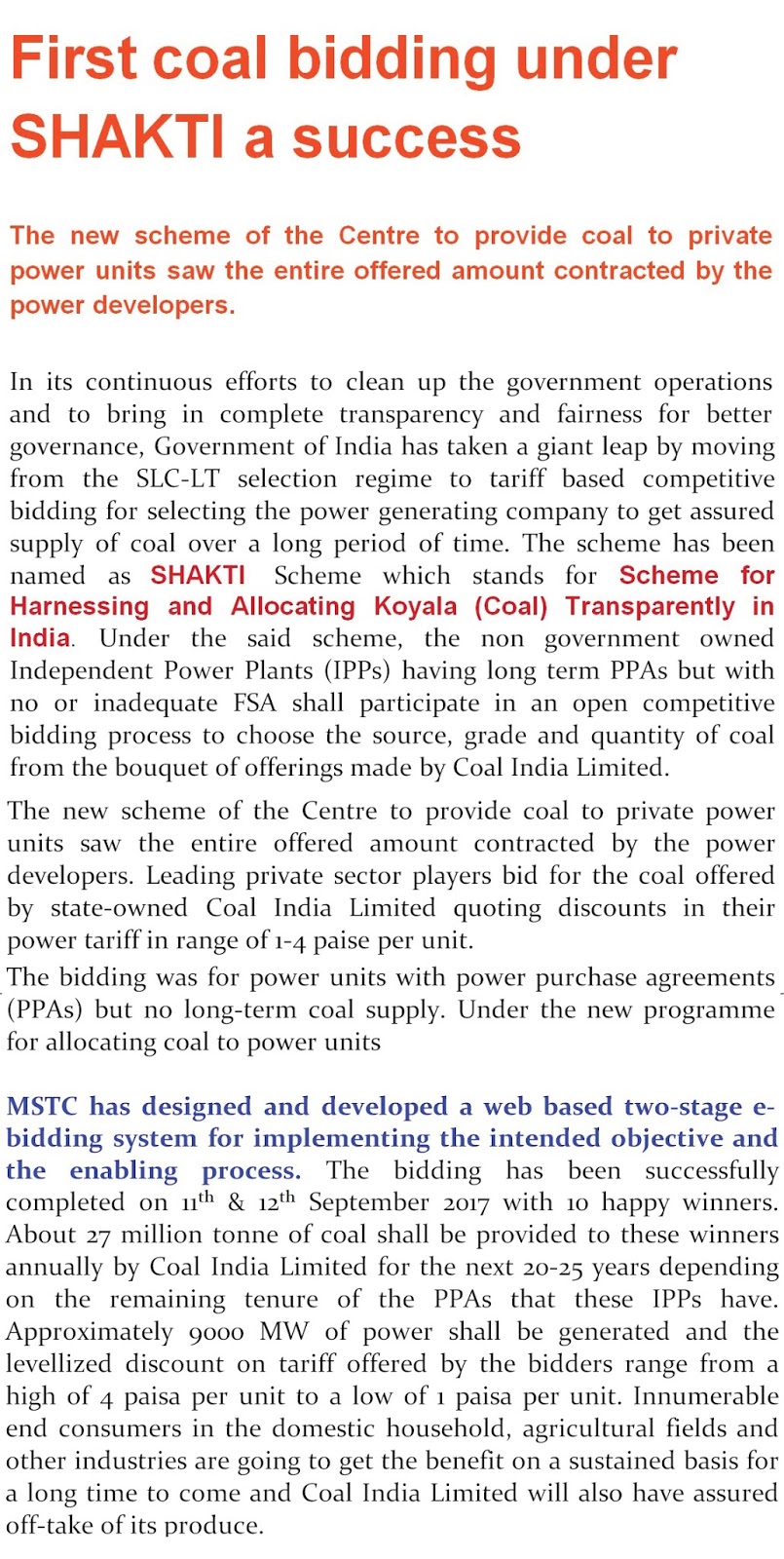 Posted by MSTC Chairman cmdmstcindia at 11:44 No comments: 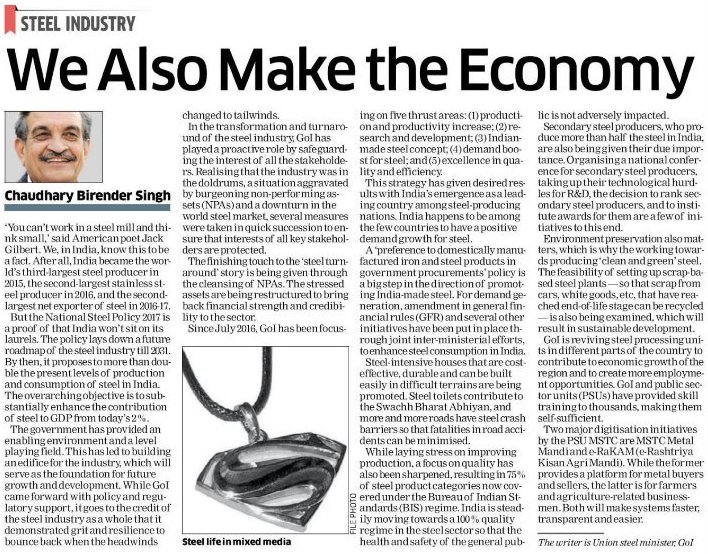 Posted by MSTC Chairman cmdmstcindia at 12:08 No comments:

Inauguration of New Office Premises of MSTC in Thiruvananthapuram on 30th August, 2017 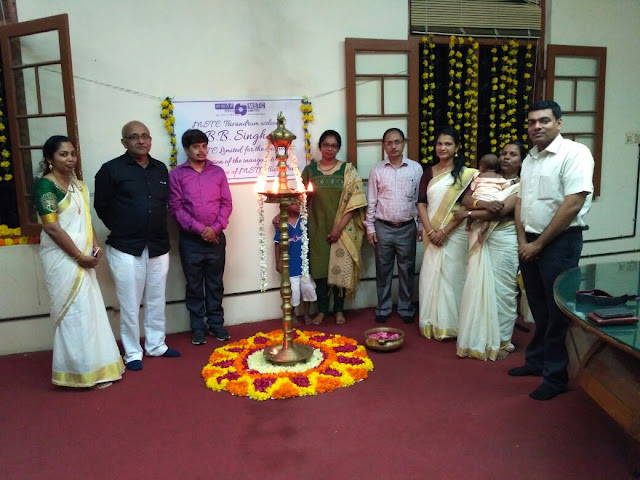 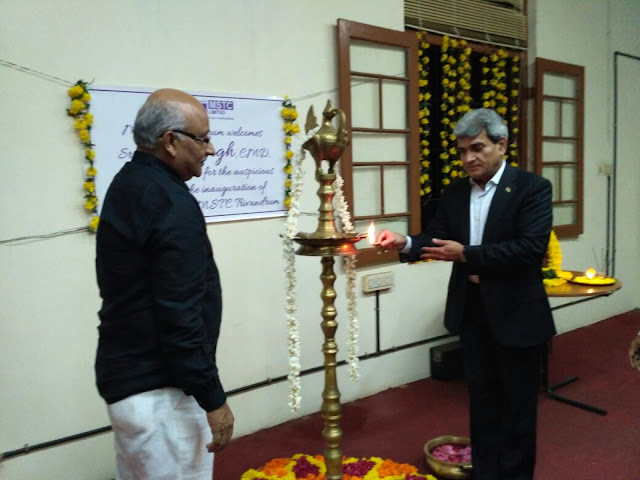 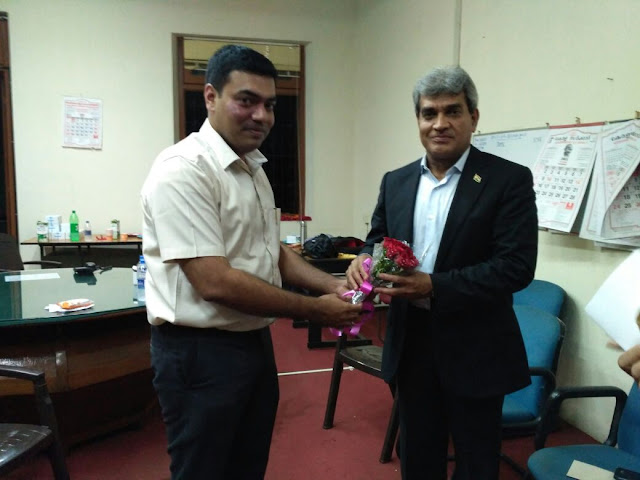 Posted by MSTC Chairman cmdmstcindia at 15:01 No comments: