MSTC conducted e-Auction for allocation of Mining Lease of Lime Stone Block - 3B1- (b) n/v Deh of Tehsil Jayal, District Nagaur, Rajasthan. This is the  first time mineral block is allocated in Rajasthan through e-Auction. News appeared in Times of India, Jaipur on 24th September,2016 is as below: 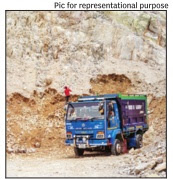 Rajasthan received a record eight times the reserved price for the largest limestone block in the country in the e-auction conducted on Thursday. The block, situated in Jayal tehsil of Nagaur, has 168 million tonne of high-grade limestone resources.
Three major cement companies such as Emami Cements, JSW Cements and Mangalam Cements were in the fray for bidding. The reserve price for the block was approximately INR 35 per tonne. After a session of aggressive bidding, the block received a final bid of about INR 300 per tonne from Emami Cements which is more than eight times the reserve price. “This is a major success for the department as it will result in revenue of at least INR 6,000 crore for the state over the life of the mine as well as create hundreds of jobs in the area. Rajasthan is already the leading cement manufacturer in the country with the presence of 23 cement plants and this will further consolidate the state's position,“ secretary (Mines) said in a release.
As per the two-stage bidding process, the reserve price for initial bids was set at 7% of INR  the first round, the highest bid came at 16.59% which was set as the floor price for second round that followed the e-auction route. The block witnessed aggressive bidding from the companies and received a final bid at 60.09% (of INR 500) from Emami Cements, more than 8 times the reserve price of INR 35 beating the previous record of 58.95% achieved in Chhattisgarh.
The block was carefully chosen based on industry requirements and its attractiveness in terms of size, land ownership pattern and economics.
“The government is committed to making Rajasthan the top mining destination in the country and is taking several steps to boost mining in the state. We are investing in world-class exploration capabilities as well as focusing on clearing all pending applications,“ the secretary said.


The department is in the process of selecting minerals blocks for the next round of auctions which will be announced soon.

Posted by MSTC Chairman cmdmstcindia at 14:24