NEW INITIATIVE TO ENSURE TRANSPARENCY - Want to Buy a House? This Govt Portal will Offer a New Window 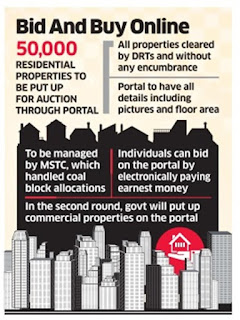 Move over property portals. The government is set to launch one of its own, initially with about 50,000 residential properties that you can bid for online.
These are properties that debt recovery tribunals (DRTs) have allowed banks to sell through auction after their owners defaulted on loan repayment. The government portal, which is yet to go live, will provide details such as the pictures and floor area and allow anyone to bid directly after electronically making the earnest money deposit.
“We will list all such properties where there are no encumbrances and hold auction for them ,“ said a senior government official with knowledge of the matter. “As of now, we have around 50,000 residential properties which are ready to be auctioned.“
The purpose of setting up a portal and holding electronic auctions is to make the process fair and transparent. “We had earlier received reports that in some cases auctions conducted by DRTs are controlled by certain groups and general public is not able participate in these auctions,“ the official said.
The auction will be managed by MSTC, a public sector trading firm that e-auctions commodities and assets ranging from human hair from the temple town of Tirupati to agriculture commodities and house plots. It also manages the government's auction of coal blocks.
Currently, banks advertise the auction of properties after the recovery officers issue the notice for sale. The new portal will remove banks from the auction process, although the sale proceeds will flow into their accounts for loan recovery.
To participate in the auction, a person will have to first register on the portal by submitting the know-your-customer (KYC) information, which includes PAN (permanent account number) and Aadhaar number, a second government official said, explaining the proposed process. “Once you have registered, a one-time PIN (personal identification number) will be sent to your registered mobile for confirmation,“ he said. Registered users will be able to see all auction-related information.
In the second round, the government will also auction commercial properties, the first official said. “We are working on that; it may be a new portal or a separate section within this portal.“
The initiative is being made at a time the Reserve Bank of India has eased the rules for commercial banks to recover bad loans that are weighing heavily on their performance. The nonperforming assets of state-run banks increased to 5.2% of their total outstanding loans at the end of March 2015 from 4.72% a year earlier, according to RBI data.
Many of the debt recovery cases reach DRTs. Though DRTs are required to adjudicate on a case within 180 days, there are many which are pending for more than a decade. According to finance ministry data, there were about 59,000 cases pending before the nation's 33 DRTs at the end of 2014, involving assets worth Rs 3.7 lakh crore. DRTs annually dispose of 11,000 cases covering loans worth Rs 21,000 crore.